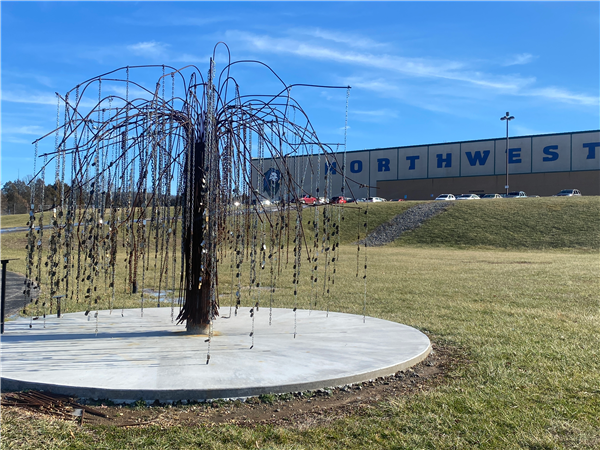 Visitors to the stadium at Northwest High School have seen, stopped at, and passed by a twisted tree of metal adorned with chains and tags that some assume is “just” an art installation. Upon closer inspection, one finds so much more; it is a tribute to United States servicemen and women in a project called “The Living Tree.”

It all started in 2017 when Northwest High School art teacher Fawn Ruch had an idea to honor the military in the Northwest community.

Ruch, who attended Boston University, said that she was inspired by the military memorial at the Old North Church, which was where Paul Revere famously hung lanterns to warn of the arrival of British soldiers.

“In their courtyard is a small memorial honoring military personnel that perished in the Iraq and Afghan war. It is a very simple installation of dog tags hanging from one pole to another.  From a distance it looks like a beautiful, woven tapestry. It’s a solemn thank you to those who made the ultimate sacrifice. The garden memorial is a tranquil place that resonated with me, and I never forgot it.”

“The welding students often talked about what they were making and the students enlisting would often talk about their training. It just seemed like the perfect time to do something.”

The memories of the Old North Church served as the inspiration for the design of the tribute. Thanks to input from students, the plan to design a willow tree, with chains holding tags containing the engraved names of service men and women, was finalized.

With a plan in hand came the next issue: materials for the project. Ruch received a grant to begin the initial funding, but a project of this size and magnitude costs money not only in terms of materials, but in time and other resources. She reached out to the local community for supplies. Local businesses stepped up, donating materials, resources, and time to help build the tree. In total, the initial framework of the tree took two weeks to complete.

“Students volunteered their time before and after school. A few students even came back during summer break to complete the last of the limbs. They really showed up and were proud to be a part of this project. I think they knew what it meant to our community and how special it was to be a part of something like this,” said Ruch.

After the initial sculpture of the tree was completed, it was time to place names on the tags and attach them to the chains which hang from the steel rebar branches.

Ruch said, “In order to get names for the tags, we reached out to the elementary schools. Families

submitted names of service members that they knew. After this, we reached out to the community. We received hundreds of names and a few donations which were greatly appreciated and needed.”

Now that they had names, they had to engrave one name per tag. Ruch said that was the biggest hurdle to get the project completed.

“Originally, we were going to use a Dremel tool and engrave (each name) by hand. But, after a bit of experimenting, we knew that was not going to be an option,” Ruch said. “Fortunately, the district purchased an engraving machine that we still use today.”

Although initially created to honor local veterans, the names on the tree are not exclusive to the Northwest community. Names of service members from Alaska to Florida adorn the tags hanging from the tree. Names are constantly being added, hence, the name “The Living Tree.” Students in Ruch’s classes are involved with the project, as each semester, they spend some time typing over 40 names each to be engraved.

Ruch said that to date, the tree contains around 2,300 names. At the end of this year, she and her students plan to add an additional 500 names.

“Our community has a strong sense of pride when it comes to the men and women that serve our country and I am proud of that. I have students that enlist every year and they always come back to talk about their experiences,” Ruch said.

In years since, The Living Tree has added signage around the sculpture, plus, with help from the Big River VFW Post 5331 in Cedar Hill, a concrete foundation. 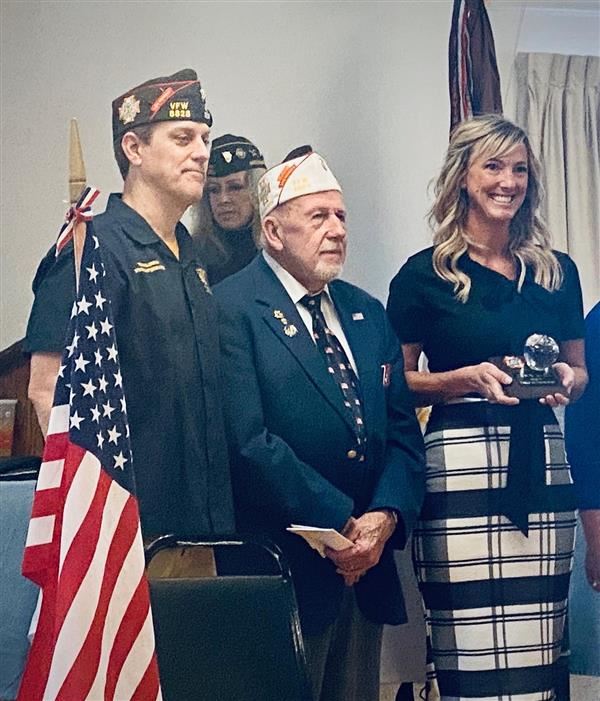 "Mark Newton and Jesse Strange with the Cedar Hill VFW are who to thank for getting the concrete around the memorial poured. That was a big deal. I don’t have any experience with concrete, so I wasn’t sure how I was going to make this happen. The concrete really brought the memorial together and made it look cohesive,” said Ruch.

The work Ruch has done with The Living Tree project has been recognized beyond the Northwest community. Earlier this month, she was named the District 8 VFW Teacher of the Year.

“I don’t feel like I am doing anything extraordinary, I am just doing my job. But, it is nice the community recognizes the work being done,” said Ruch. She added, “I didn’t expect to win. Winning the next round would be really great for our community. This is just as much their award as it is mine. Without the district's participation, this memorial wouldn’t be what it is.”

Thanks to Ruch, the work of her students, and community involvement, The Living Tree will continue to live and honor our service members for years to come.

In compliance with Federal Law, the Northwest School District administers all education programs, employment activities and admissions without discrimination against any person on the basis of gender, race, color, religion, national origin, age or disability.
Copyright © 2002-2022 Blackboard, Inc. All rights reserved.