Woodridge Rocket Team Aims for the Stars at National Competition

In order to qualify for the national competition, teams had to meet criteria for their launches. Teams were required to design, build and launch a model rocket that carries one raw egg to three different altitude and time goals: 800 feet within 40 to 43 seconds for their qualifying flights. The national competition required teams to launch their rockets 775 feet within 39 to 42 seconds and 825 feet within 41 to 44 seconds. Both launches required the rocket and egg to return to the ground unbroken.

Rocket team co-sponsor Severin Krautmann said that during launch sequences, coaches were required to be absent from the team.

“The students did a tremendous job of taking on the challenge entirely by themselves. They worked quickly as a team to get both of our launches prepared, checked and launched.”

Unfortunately, the results were not in the Woodridge team’s favor.

“Regrettably, the two launches we had were both disqualified,” said Thomas Laybourn, Woodridge Rocket Team co-sponsor. “The first had what is called a ‘separation,’ where one portion of the rocket did not remain attached. The second had a parachute failure which caused it to hit the ground very fast and break the egg.”

Laybourn said that both rockets reached “respectable heights,” with one only 31 feet shy of the required altitude.

Regardless of the results, Laybourn was proud of the students. 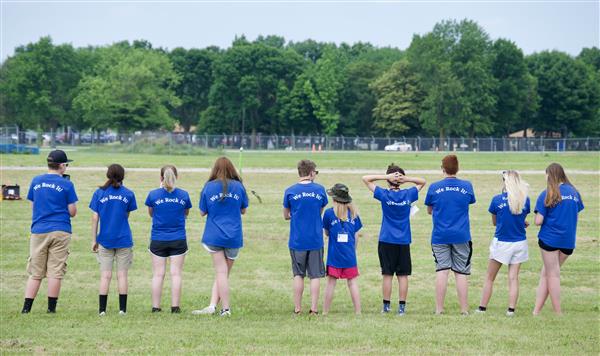 “The kids did an absolutely superb job. Morale was high the entire time. Despite the shortcomings of the launches, the kids recognized that they reached Nationals - no mean accomplishment.  We'll nail it next year!”

The competition is the world’s largest rocket competition. It featured teams from 27 different states and the U.S. Virgin Islands. The Woodridge Rocket Club was one of only four teams in the state of Missouri to qualify.

In compliance with Federal Law, the Northwest School District administers all education programs, employment activities and admissions without discrimination against any person on the basis of gender, race, color, religion, national origin, age or disability.
Copyright © 2002-2021 Blackboard, Inc. All rights reserved.